In October, EbM has the pleasure of working with artist Travis Somerville from Oakland, California, to install his new work, Rainbow Warriors.

Somerville's project will a permanent installation on our site in Moriarty, New Mexico, that will use light and the surrounding atmosphere to create high desert apparitions at night.  The self-contained solar powered project will project a rainbow light upward from the earth, appearing and disappearing as dust, rain, snow and other particulate matter flow through the air.  While not only responding to the physical environment, the installation makes reference to a Native American legend of the Warriors of the Rainbow that Somerville states, "are promised to restore purity to the Earth and justice to Mankind, ending the current state of environmental destruction."

In the video above, Somerville talks about his practice and the project he will be creating with the assistance of lighting engineer, Dan Dodt.  The video is part of Somerville's Kickstarter campaign to raise the needed funds to complete the project.  Please consider donating to make this project happen.  The full Rainbow Warriors kickstarter page can be found here:
http://www.kickstarter.com/projects/987729825/rainbow-warriors-legend-led-light-installation-new

Posted by Alex Clausen at 12:52 PM No comments: 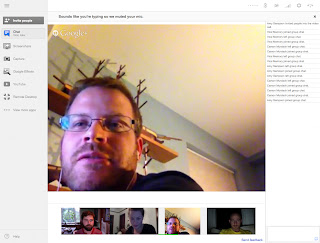 Since the fall installs are coming up quick, we've started up our weekly meetings via video conference, bringing together members that are spread out across the U.S.
Posted by Alex Clausen at 8:21 AM No comments: 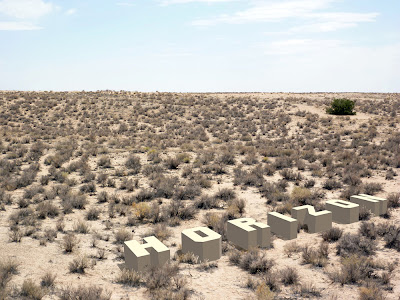 This fall we have the pleasure of working with Fort Bragg, California, artist Scott Oliver in Rio del Oro.  The site is part of the largely undeveloped Rio Communities south east of Los Lunas, New Mexico.

A New Horizon will consist of 7 large letters cast from local aggregate materials.  As Oliver states, it "... is a spot to rest and a vantage point from which to take in the surroundings even as it bifurcates one’s attention between near and far. Made out of the ground on which it rests, A New Horizon is literally part of the landscape—a patch of untamed desert given coherent (if enigmatic) form."

With A New Horizon, Oliver is also referencing a division which has defined the empty, but parceled out acreage.  The Rio Communites were part of a dubious real estate venture in the 1960's where the area was divided up and sold employing the romance and lure of the American West.  The corporation, also named Horizon, created subdivisions that were and are all but impossible to build.  More information about the site and the Horizon will be provided in a later post. 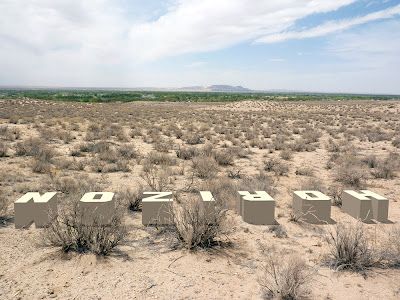 Oliver's work will incorporate the physical and historical aspects of the site and as he states it is "...meant to be a pause—an interstice in the landscape and in time. It begs the question: what’s
next? But is unconcerned with the answer. The space it defines is the space between."

An event is planned on-site at the completion of the installation on October 19.  The event titled Desert Dumbballs & Llano Stories.  Oliver describes the event as "a hybrid of contemporary
Chautauqua and sculptural performance."  The event will include performances and presentations that exploring the project site and its surroundings.

Oliver has the honor of being listed as a part of the High Desert Test Sites 2013.  The program is a series of desert installations, events and performances that stretch from the Mojave Desert to Albuquerque from October 12 - 19.
Posted by Alex Clausen at 2:57 PM No comments:

Our hibernation has ended and we're in full swing planning mode for two incredible installations taking place near Albuquerque this fall.  The two sites, Moriarty and Rio del Oro (formerly known as Los Lunas), will have new permanent works created by artists Travis Somerville and Scott Oliver respectively.  These sites were the home of last year's temporary projects that coincided with ISEA2012.

We're at day 45 before the week long installations start in the New Mexico desert. We'll be updating with details about the projects on their path to completion.

Please also check the EbM Facebook page which already has a ton of info about the fall!

Posted by Alex Clausen at 8:04 AM No comments: