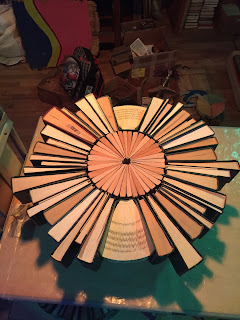 EbM member -- and before that the artist responsible for Keystone and Switch in Evanston, IL -- Jon Whitfill is currently in the  midst of raging away on two commissions. The bookwheel above is for a hospital in Dallas, TX, USA that I like to Pokemon I Choose You Memorial Hospital. That is not it's actual name, though. 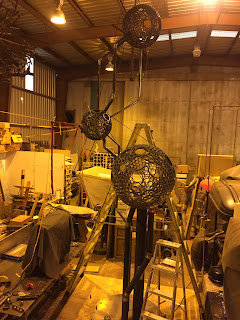 This lovely metalwork, calling to mind the microverse and the macroverse, and what-the-hell the multiverse, too, will be installed out front of the Texas Tech University art building this summer. Lovely. Congratulations, Jon!

Pay a visit to SFMOMA's blog, Open Space, to drink in the first post by our good friend and sometimes collaborator, marcella faustini.
marcella kicks off her series of conversations with artists by sharing some of the notes, research, and inspiration for her discussions. She describes it thus:
"the somewhat frantic organization, full of links (that will neatly open for you, in a new tab. so go ahead and click) and imagery, mimics to some extent my process of going about compiling information and inspiration for these talks. they also function as the preface to the narrative that connects my (hi)story to the ones i will be encountering through these talks."
An artist whose conversation with marcella I look forward to is Morehshin Allahyari (image above)

– in order to expand its own fictional lines of terror, isis has taken to salafism, an ultra-conservative reform movement which vouches for the implementation of extreme islamist beliefs to the point of self-annihilation. this can be observed by their ongoing destruction of their own historical visual culture. artist morehshin allahyari’s project material speculation, offers a way to subvert the damage by using 3d printing and modeling to re-create these destroyed and thought forever lost objects: “The first series ‘Material Speculation: ISIS’ is an in progress 3D modeling and 3D printing project focused on the reconstruction of selected (original) artifacts (statues from the Roman period city of Hatra and Assyrian artifacts from Nineveh) that were destroyed by ISIS in 2015. “Material Speculation: ISIS” creates a practical and political possibility for artifact archival, while also proposing 3D printing technology as a tool both for resistance and documentation. It intends to use 3D printing as a process for repairing history and memory.”

Let us look at Martian clouds and weather


Long before most fine art did so, sand and butter mandalas deeply touched and influenced me. Their transitory and performative nature meshed with my understanding of music as an experiential art, not just auditory, but a way to address all of the senses, and to experience altered states. Thank you puffer for brightening my morning. (And special thanks to spouse Kelly for sharing it with me!)
Posted by !N! at 7:51 AM No comments: